Alliance of Valiant Arms Wiki
Register
Don't have an account?
Sign In
Advertisement
in: Weapons, Assault rifles, Automatic,
and 3 more 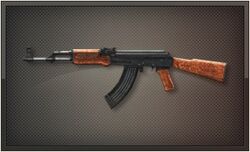 The most prolific firearm of the 20th Century, the AK family is the most widely produced and copied firearm in history. Created by a wounded tank sergeant during the midst of the Second World War, it reached widespread fame due to its cheap and reliable design. It spawned an entire family of firearms, ranging from the AKM to Saiga shotguns, and inspired an entire generation firearms based on the same design principle.

Introduced in 1959, the AK got a face lift with the AKM. The "modernized" AK went through several design improvements. Compared to the original, machine milled receiver, the AKM featured a stamped steel receiver, optimizing it for mass production. The cheaper means of production has been replicated worldwide, propagating the AK design around the world. It's iconic shape has been as symbol of both freedom and oppression around the world. Unfortunately, fears of communist invasion during the height of the Cold War has given the AK the "bad guy's gun" reputation that we are all familiar with within the U.S..

While powerful, the 7.62x39mm cartridge lacked accuracy and range. The slow and heavy projectile, combined with the already cheaply produced firearm, meant that the AKM suffered severely at range compared with western NATO firearms firing the 5.56x45mm. In response to the NATO standard cartridge, the AK74 entered service in the late 70's, replacing the AKM, and remains the standard service rifle of the Russian troops today. Essentially the same gun, the AK74 fired the smaller and faster 5.45x39mm cartridge. It featured higher accuracy than the AK47, sacrificing the legendary stopping power of it's older brother.

Ironically, while variants and copies of the AK47 can be found around the world, "true" AK-47, are extremely rare, especially in the U.S..

The AK-47 is the third remake of the rifle with the same name (after the MK.3 and MK.4). It was originally released in Open Beta of during the Aeria to En Masse transition as one of the first euro-metered weapons.

Compared to the MK.4, nearly all the stats are the same, excluding damage which received a buff of 1 point.

The AK-47 is easily recognizable due to it's mixture of stamped steel and wooden external components, and it's shape.

It features high damage for an Assault Rifle, moderate recoil and a comparatively low rate of fire.

It is a tad heavier than other Assault Rifles, but the player is still able to achieve moderate speed when sprinting.

The AK-47 fits a variety of roles very well:

It is recommended to fire in 2-3 bursts and aim for the head when using this weapon at medium to long ranges, while fully automatic volleys(8-15 rounds) are recommended at close to medium ranges. But this gun is one of the most liked guns for low ranks due it's high damage, along with the M4A1 and AK-47 this is definitely the most used gun for low ranks and the AK-47 especially for the people that have multiple accounts thus making them experienced can tap (single firing to reduce recoil) this weapon and aim for the head, thus killing faster than the M4A1.

There has been much debate over whether or not the AK-47 is a weapon for newbies. People often criticize the AK family, but it is usually only because they are some of the most powerful rifleman weapons in the game. Their high power and fairly high accuracy, aside from their popularity in the real world and in other games, have made them well known in the A.V.A. community.