Alliance of Valiant Arms Wiki
Register
Don't have an account?
Sign In
Advertisement
in: Weapons, Assault rifles, Automatic,
and 3 more


The AK74M is an Assault Rifle first introduced in the 08-26-10 Content Update. After the recent 06-04-14 update with no permanent guns in the in-game shop, this may be a staple weapon for new players due to its very low rental price of 7,500 euro for 30 days. As the rental does not need repairs, it may become cost effective for avid players and is a decent weapon that can stand on its own. Due to the recent updates, tournament rules may ban the use of weapons more expensive than 7,500 euro per month.(After returning the ability to purchase weapons in-game shop, it remains the most cheap assault rifle for purchase.)

The AK74 is currently the standard issue assault rifle for the Russian Military, while the AN94 being the weapon of choice for Russia's elite special forces. Essentially, the AK74 is a updated version of the AK47, firing the lighter and faster projectile, 5.45x39mm round. The development of the AK74, as well as the 5.45mm round was in direct response to NATO's adoption of the 5.56x45mm round. It operates on the same gas piston driven operating system used by the AK47. The AK74M version is the modernized version of the original 74 model commissioned in 1974, featuring a reinforced polymer stock and hand-guard.

There are two ways to use this weapon:

Crouching as soon as you see the enemy and killing him from a still position. With this you can abuse the weapon's still-stability, but beware of the Moving recoil lag:

What is stated above is the biggest flaw of this weapon. The fact that for the first .25 after you crouch, the weapon still behaves like you are standing, or even moving, depending your action before crouching (whether you were sprinting or running). This was likely implemented to keep this gun from being blatantly over powered, as this gun would have been if this feature wasn't added. So the best solution would be to work around this, and here are some tips:

2)Controlled Fire These are the tips for avoiding the problematic recoil. Shoot in small bursts or taps, Since the recoil the more you fire the gun, taking quick breaks and releasing the trigger for small waits can increase performance Below are general usage tips for this rifle.

Depending on the scope you have several options. Always try to minimize your mobility for this.

Follow these tips, and the AK74M could be absolutely devastating on the battlefield. It is one of the most overlooked assault rifle in game, and it is WELL worth the 41,000 €.

Note: Stablizes crouchshot, destabuilizes moveshot after a while; good for first shots, later shots are destabuilized; adds some vertical recoil, decreases initial side to side bloom

Lenient towards full auto, and ADS is sub par.

Recoil per shot is exactly like the ak47, scoping is sub par.

While this version emulates the SG 550's great accuracy by increasing mobility, its ROF is much lower then the 550, so moveshot accuracy is actually on par with the SG 556. Recoil is close to the 550's, and has more DMG, although crouchshot is different.

Blooms on prologue fire, pulls up like a ak74u, needs to be bursted. 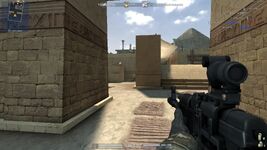 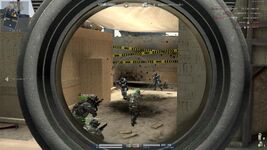