Alliance of Valiant Arms Wiki
Register
Don't have an account?
Sign In
Advertisement
in: Weapons, Primary weapons, Automatic,
and 5 more

The AKS-74U Desmodus is an automatic carbine used by point men, and is available for permanent purchase in the in-game shop for 200 blue tickets by soldiers of or above the Staff Sergeant Lv 3 rank. It is an upgraded model and custom variant of the AKS-74U, featuring dark blue, purple and black paintwork, with a bat motif displayed across the main body.

As a result of the AKS-74U Desmodus serving as a directly explicit upgrade from the original AKS-74U, this weapon subsequently features exceptionally high damage and range, which are coupled with unusually high accuracy and stability for a point man weapon. As with the majority of the successors to the AKS-74U, the usability of this weapon has been dramatically improved, and eliminates the option of modification without harming its practicality on the battlefield.

In terms of statistics, the AKS-74U Desmodus is identical to most other upgraded variants of the AKS-74U, given the exception of increases to ammo capacity, where this model has the standard 35. Due to this match-up in statistics however, you can expect to see the same performance when compared to most other versions. The drop in accuracy and stability while moving is extremely minimal, making it a favorable choice for those looking to out-last or rush their opponents.

Armor is torn through at a considerable rate when shots land in the torso and helmet areas – the AKS-74U Desmodus's unique ability to rip through armor with head-shots is noticeably greater than other similar weapons, meaning aiming for the head is an effective method of dealing consistent damage; even at longer ranges. A single head-shot can deal up to a quarter of your enemy's health at up to 40 meters, with each consecutive shot dealing more damage due to lessened armor.

Due to the versatility of the AKS-74U Desmodus, it is common to see its use in the majority of maps. Its combined efficacy as a close-range point man weapon, paired with its competitiveness at longer ranges makes this weapon strong competition against even the more advanced rifle man choices. Despite this, prolonged fully automatic fire at longer ranges is not advised as accuracy may become questionable – bursting in smaller groups can be beneficial in these situations.

The AKS-74U Desmodus cannot be modified.

The AKS-74U Desmodus cannot be modified.

The MP7A1 has minimal recoil, especially when bursted. While the recoil pattern is different to that of the AKS-74U Desmodus, their usability is comparable in that fully automatic fire is very viable at closer ranges, and landing shots on opponents further away is still a capability. However, the MP7A1 suffers from a noticeably smaller range and damage, making the AKS-74U Desmodus the preferred choice in larger maps, but nonetheless remains a strong competitor for a fast-paced play style. Both weapons feature exceptional mobility for heightened maneuverability. 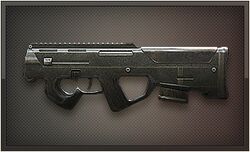 Again, the MAGPUL PDR has a very small level of recoil/inaccuracy, meaning that it shares a similar play-style as the AKS-74U Desmodus. The MAGPUL PDR's damage is slightly lower, but redeems itself with exceptional handling – you can safely enter fully automatic fire, even at longer ranges. The need to burst is almost non-existent; which mimics the AKS-74U Desmodus's ability to endure fire fights. Though the MAGPUL PDR is easier to control, its range and armor penetration lets it down, meaning you're expected to land a larger amount of bullets to finish your opponent.