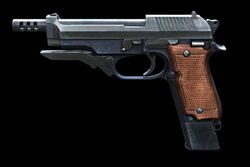 
The Beretta M93Ra is a Machine Pistol first introduced during the 03-10-11 Content Update.