Available as a Modification

The Blaser R-93 boasts in fast ROF, with a DSR-ish tag rate. The scope is fast, which makes this a good quick scoping sniper rifle. The moveshot is comparible to the AWM, however, the tag rate is moderately high so make sure to have a decent sidearm. The recommended mods are the Sharpshooter Scope and the Reinforced Barrel. The silencer is not recommended unless you like to go for the "Lulz" . And it's the second suppressed Sniper Rifle in AVA , the first being the VSS and the 3rd being the ASW.338. The Blaser R93 will still tag a lot despite the 104 damage boost from the Reinforced Barrel (+8 Damage; 96 + 8 = 104). The new training Blaser R-93 comes with the 7.62 PZ Shot Noise and quick scope, so do not quick switch with this version as you don't zoom in after cycling the bolt and the switching animation is longer than its normal animation.

Putting the 7.62 PZ Shot noise will make the weapon silenced , but the Tag rate will be increase drastically .

Player are recommended to modific the following parts in order to gains 8 damage in exchange of 1 points less of RoF and Stability.

Shot at the arms

The Blaser R93 a unique sniper rifle due to it's enhanced mods that allows it to shoot as fast as a semi-auto sniper with the Precision Scope as fast as the Quick Scope, but with longer range and and a two phase zoom. It is one of the best move shot sniper players can obtain from the Euro shop. {i think it's cheaper now}

The way I, {Covolsky}, play it is by zig-zaging about the battle field and rapidly firing back at snipers or waiting for some one crossing my line of sight and sniping them. If I miss, I leap out of cover and zig-zag, confusing the opponent. It is easy to take cover after every shot and instantly returning before the opponent has time to Quick Switch, and it is also easy to get a follow up shot if they tank your first shot due to it's amazing high rate of fire. It isn't recommended to Quick Switch with this weapon with the Quick Scope upgrade as the normal animation is faster than switching. Unlike semi-auto snipers, when you shoot you stay zoomed in, but the Blaser R93 is a bolt action sniper that zooms out after every shot. This is NOT a weakness because while zoomed out you have a small amount of time to examine your field of view before you limit it by scoping in. ~~ Covolsky 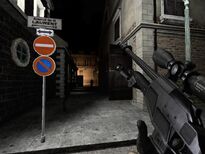 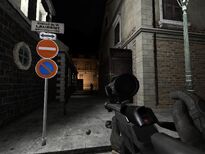 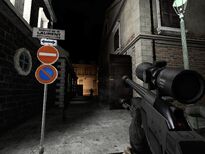