View source
watch 01:36
We're Getting Mutants in the MCU - The Loop
Do you like this video?
Play Sound

The CZ75 is a secondary weapon, with 16 ammo and high stability to compliment above average firerate. This 1kg secondary weapon does not weigh down it's user at all and comes with a basic 60 accuracy.

It's stats are somewhat similar to the Beretta92FS. The performance is similar to the Berreta, but it will take more bullets to kill. This should not be a problem due to this pistol's generous Stability(88.7) and Rof(8.26).

This pistol can be bought as an expendable item or a permanent item, though it is generally recommended to purchase the TMP or MK23 SOCOM if you plan to purchase a sidearm permanently. Performance wise, it's exactly what you come to expect from a standard pistol, though the CZ75 does have a generous 16 round clip. It shoots faster than the SOCOM but does less damage, so depending on how fast you can tap it may (or may not) kill faster in closer quarters. It does pull off headshots well, but bodyshots tend to be weaker then they need to be. It's weak damage compared to other pistols is the main turnoff, by it is rumored to have a faster Draw Time than most other secondaries.

It is very similar to the FN57, which is another pistol with low damage but high ROF rate when tapped rapidly. 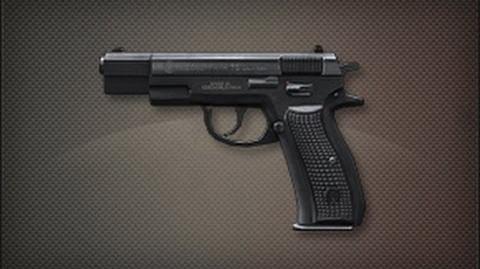