The Colt SAA is a "pistol" first introduced during the 10-20-11 Content Update.

The Colt SAA (Single Action Army), is a revolver also known as "The Peacemaker", and is commonly associated with the American "Old West".

This gun is unique as it has a completely different set of animations for all interactions with the gun ( due to its simpler, older design). Since it uses a chamber mechanism, each bullet must be reloaded (and un-loaded) individually, giving it a unique (but extremely long) reload animation. Since the hammer must be cocked manually between every shot, the player uses the left hand to pull it back, giving it both a unique animation when shooting, as well as a unique idle stance.

Preformance wise, it sports a high fire rate, high stability, good damage, tolerable accuracy, and predictable vertical recoil. In fact, the only true weakness this weapon is its extremely long reload animation, which balances out this otherwise overpowered weapon.

It is often a headshot in one bullet at any range (depending on enemy armor), and can kill between 2-4 bullets to the torso, depending on range.

It is a highly recommended candidate for those who want to "Main" a pistol. Do note that while it fares very well in competitive game modes (demolition, TDM, etc.), it is not as effective for other gametypes (escort, AI missions, etc.) since the reload animation and short clip hinder its ability in prolonged firefights.

Although the weapon shells are loaded individually, it is impossible to shoot while the animation is going on.

It is a excellent back-up for when the main weapon runs out of ammo, thanks to it's lighting fast draw time (0.6s)

Quite a unique weapon. Ressemble the Mosin Nagant for its high power and one-by-one reload animation. 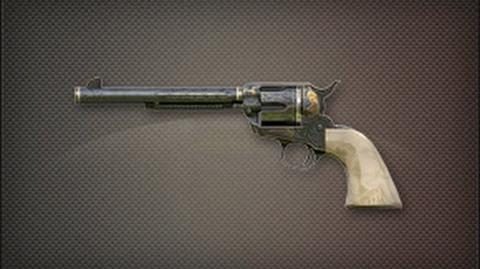