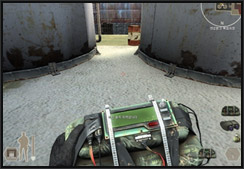 "Set the charge, now!"
- EU member telling his teammate to plant the bomb

Demolition is the Search and Destroy game mode of AVA. The objective is for the EU is to plant the C4 in one of two bomb sites and ensure its detonation, while the NRF's objective is stop the EU from planting and/or defusing the C4. The one aspect of the gamemode that makes it distinctive from all others is the fact that there are no respawns. With that being said, if the Player dies, they're out for the round. Demolition maps are one of the biggest in the game (second only to Escort maps), and contain the most detail and objects out of every other map, leading to several unique firefights and encounters.

As the EU, you win the round if:

As the NRF, you win the round if: