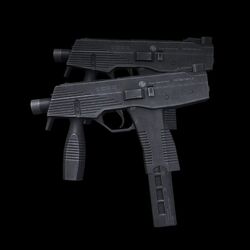 
The Dual TMP is a Pointman weapon released in the ____ content update.

The Dual TMP's predominate feature is the total magazine size of 50 bullets and its expeditious fire rate. As a Capsule Shop weapon, it cannot be modified. The Dual TMP also cannot be zoomed, and is incompatible with silencers. The Dual TMP also comes equipped with crosshairs rather large for an Submachine Gun, ironically enough the same size as its single counterpart. Due to all its attributes, the Dual TMP is an atrocious weapon at long range, and should never be fought with beyond 10 meters. Making use of its high mobility will make closing in on enemies easier, even negating the insane recoil that comes from handling two machine pistols. Despite the low damage per bullet of the Dual TMP, the blazing Rate of Fire will more than account for the lethality of this weapon, making it one of the most efficient Pointman weapons in the game.

Rush with them. Never challenge an enemy at any sort of range. Full spray and drag down if the enemy is within 5m, 6-shot burst otherwise.