Alliance of Valiant Arms Wiki
Register
Don't have an account?
Sign In
Advertisement
in: Weapons, Secondary weapons, Pistols,
and 2 more 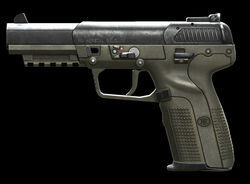 
The Fabrique Nationale Five-seveN (FN57 in game) is a Secondary Weapon first introduce in the 12-09-10 Content Update.

The FN57 is a deadly pistol. Although it doesn't deal as much damage per round as other pistols, it makes up for that with an unrivaled magazine size, a quick drawspeed, a rate of fire (ROF) in competition with the Skorpion, and almost unlimited range (it has about 32.5 damage as minimum damage). The ROF is the highest of all semi-automatic pistols, so the only pistols challenging the FN57 would be the TMP and the Ingram MAC-10. One must keep in mind however, that the pistol is semi-automatic and a g coin capsule. But this gun is very deadly for decent snipers, if they get tanked, they pull this pistol for it's almost unlimited range and ROF to overwhelm the enemy with bullets.

From JAVA damage tests, due to its penetration, it does the exact same damage as the Beretta92FS against 09 at all ranges, making it a superior pistol overall.

There are no modifications available for the FN57, as it is a capsule weapon.

There are no modifications available for the FN57, as it is a capsule weapon. 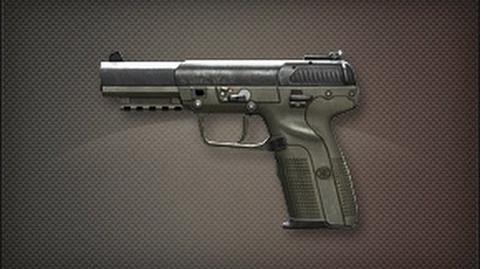