View source
watch 01:36
We're Getting Mutants in the MCU - The Loop
Do you like this video?
Play Sound

The FN FAL C is an automatic assault rifle used by rifle men. To acquire a FN FAL C you must have purchased the euro shop SA58 Para from the time which IJJI were hosting A.V.A. In your inventory it will appear as a SA58 Para but in game it will become the FN FAL C, the stats of the gun can be seen in your inventory. It has a new water/ice camouflage.

The FN FAL C is a very popular standard weapon which is well-known for its trademark style of gameplay. To account for the large amount of skill required to use it; extremely high damage, range, fire rate and armor penetration are all present. Where the focus of this weapon has been heavily set on a large damage output, an expected deficiency in stability and prolonged accuracy is present, which can become more noticeable when faced against multiple targets or at long range.

While recoil at longer ranges can be problematic - the high range means that the FN FAL C will maintain damage output over a significant distance, making it easier to secure kills in fewer shots, and subsequently still makes it suited for demolition and other larger, more open maps. Unlike most rifle man weapons that are designed for longer range, engaging with targets at close-range does not give too much of a disadvantage due to the high fire rate and consequential damage output.

The FN FAL C has exceptional armor penetration. Even at up to 40 meters, the damage done with a single shot to the head can bring your target down to critical health. Shots landed on any other part of the body rip armor away at a fast and consistent rate. The largest problem is maintaining this weapon's usability in extended fire – fully automatic fire is not viable unless you are at point-blank range; tapping is the most effective method of securing kills, even at mid-range.

Despite having a remarkable damage output, the usability of the FN FAL C does not allow it to endure past other conventional weapons, meaning that you will find yourself shift-walking and crouching much more often than you would with other popular rifle man weapons such as the M4A1 and AK-47. This makes strafing less feasible and potentially makes you a bigger target. This can be offset by tapping fast and landing as many successive shots as possible in the shortest time.

Reinforced Barrel allow you to kill enemies in two shots if both shots land on the waist and in a constant 3-shot kill with in its range. It is advised to crouch when tapping to reduce accuracy loss and bloom. Full auto at close range to make full use of the rate of fire. This is my personal preference as it make use of the 1 extra damage that the FN FAL C has.

The AK-12, having been released later than the FN FAL C, has been modernized, most notably with an increase to accuracy, stability and range – seeing the AK-12 used commonly by those who enjoyed earlier iterations of the FN FAL C. Despite the upgrade to usability the AK-12, much like the FN FAL C, still needs to be tapped to maintain control; it is uncommon to see it even be bursted due to the drop in stability. The SA58 Para and subsequent variants nevertheless remain popular due to the higher fire rate – tapping is made much more effective at mid-range. 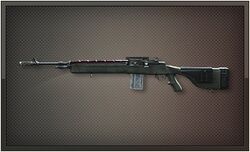 Similarly to the AK-12, the M14 DMR was released much later than the FN FAL C, and also sees the same modernization: an increase to accuracy, stability and range. Contrarily, the M14 DMR is actually capable of 2-shot bursting quite comfortably with certain modifications at mid to close-range. At further ranges, again, you'll find that tapping is the most efficient way of handling the recoil. The M14 DMR however also sees a drop in fire rate and has 5 less ammo than the FN FAL C}, which makes it the less favorable of the two for those looking to tap fast.