Grenades are items used by all classes, causing damage or impairing sight after hitting the ground. Grenades have a wide variety of uses that provide both an offensive and defensive benefit.

The Rifleman can throw grenades faster and farther than any other class.

Within A.V.A, there are five types of grenades: flash, smoke, fragmentation, flash + fragmentation and incendiary grenade. 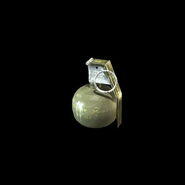