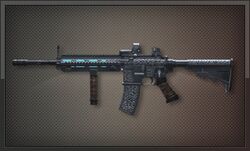 
A capsule version of the HK416. Available from 5th December 2012 Content Update.

The HK416 Mjollnir is a HK416 capsule variant with an electric blue motif. The weapon features a custom scope, with a blue dot sight. The weapon is a long range variant of the HK416. The range and stability have been increased, but the RoF has been lowered.

When aiming down the sight, the recoil is almost nonexistant, making it similar to an AK107bis.  However, the HK416 Mjollnir shoots somewhat slower when aimed, so it is advised to try and achieve headshots or bodyshots to ensure maximum damage.

Compared to the original HK416, the Mjollnir has better range and stability for exchange of a lower damage and RoF. It makes the gun easier to handle at longer ranges but less deadly in general.