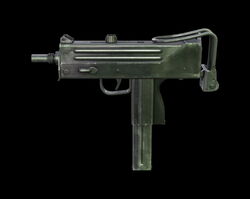 The MAC-10 has a high rate of fire and mobility. It also has decent stability. Also, normal hip-fire at close range proves to be as deadly and effective as any other SMG. This weapon is best suited to AK-47 users because their quick reflexes to right-click and crouch proves very useful with this gun. In the eyes of most people, they call it an Uzi secondary due to the looks and stats that are very comparable with the Uzi's and also say that this is the best fully automatic pistol along with the Berreta M93R.

The MAC-10's accuracy and range is very low. But, by right-clicking and crouching, you can greatly increase accuracy. Also it has relatively slow draw time which makes it an "out of ammo" weapon or snipers running weapon.