The M16A2 is a standard-issue rifle for the United States Army. It is well known for its legendary accuracy, light recoil, light weight, and superb handling ability. In AVA, however, it is considered an average weapon and is generally not popular. It is also important to add that like A4 the A2 variant of the M16 in real life fires 3 round bursts and semi-auto, instead of full-auto. The original M16, XM16E1, M16A1, and A3 variants have full auto capabilities.

The M16A2 is available only to the Riflemen class. Its accuracy, damage, rate of fire, and stability are all decent. It does not shine in any particular category, which can be considered both a pro and a con in that while it is versatile and easily adaptable to most situations, it is outclassed in close range by rifles that excel at close range, and outclassed in long range by rifles that excel at long range. The main quirk of this weapon that drives people away is its spread. After the first 3 or so shots, the crosshairs will steadily bloom until they become too wide to use effectively beyond point-blank range. However, the M16A2, when tapped or used in 3-round bursts, is a very formidable weapon, especially in conjunction with crouching as it has little to no recoil during its burst. Tapping repeatedly will greatly slow the crosshair bloom while still being almost as fast as fully automatic. It's extremely low recoil during the first 3 shots is excellent in CQC if one can make use of headshots.

In ijji AVA, being of Ducky rank, it is one of the few rentable weapons and is also the most inexpensive of all the rentable Rifleman guns.

In AVA SEA, the M16A2 is the default gun for the Rifleman class, replacing the G3A3 on other versions.

For more inexperienced players, it is recommended not to have any mods at all.

Depending on the firefighting range , the player can choose the Long range Barrel to improve the damage over range , or use the Burst barrel to mitigate the sub-par close range capacity . But keep in mind that the burst barrel will reduce your weapon's accuracy  and also increase the spread when firing . The Shock Absorber is one of the good choice to use because it doesn't reduce your move-shot accuracy , like other weapons . So the player could use the Shock Absorber to compensate the accureacy loss from using Burst barrel . 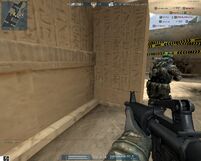 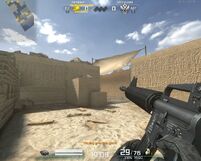