Alliance of Valiant Arms Wiki
Register
Don't have an account?
Sign In
Advertisement
in: Article stubs, Weapons, Shotguns,
and 4 more 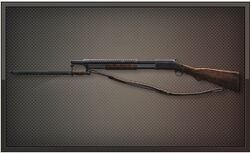 The M1897 Trench gun is the first shotgun to equip a bayonet, and is one of the few weapons to have a bayonet. The bayonet can be used by clicking Mouse1 (Right click), and is an instant kill if it hits. The bayonet has better range than melee weapons, making it a very good substitute to your knife. The rate of fire (RoF) says 30, but it surpasses even the mighty Striker 12s RoF mod, which is 48 RoF. The only drawbacks of the M1897 is the slow draw speed, which requires the bayonet to be attached and the shotgun to be pumped, and the low damage. Very effective on maps such as Black Scent, India, Fox Hunting, and Supply