Alliance of Valiant Arms Wiki
Register
Don't have an account?
Sign In
Advertisement
in: Weapons, Assault rifles, Semi-automatic,
and 3 more 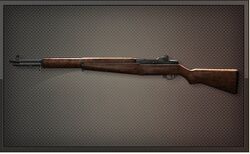 
The M1 Garand is a Rifleman weapon released in the July 3, 2013 content update.

The M1 Garand is a semi-automatic Rifleman weapon and boasts the highest damage, 56 damage points. Though powerful, the M1 Garand was really made for close quarters, not long range combat. Despite the powerful 56 damage, the low 41 range and huge crosshairs makes the M1 Garand unsuitable for medium to long range combat. Aiming down the ironsights is a must, as that is the only way to maintain the 78 accuracy. The low range often times causes the player to shoot ‘’’more than 2 shots’’’ at medium to long ranges to kill an enemy. However, the M1 Garand bridges the gap between the M14 and the VSS. When ADS (aiming down sights), the M1 Garand has nearly no recoil and can be used similar to the AK200 and the AK-107bis, making the 38 stability a complete lie. The 8 round stripper clip puts the M1 Garand at another disadvantage- the inability of taking down multiple enemies at once.

Due to it being a capsule weapon there are no mods for this weapon.

Due to it being a capsule weapon there are no mods for this weapon.

The M1 Garand is truly a unique rifle, and can be compared to top tiered Rifleman weapons and some sniper rifles. It can outgun most Rifleman weapons if used properly (i.e., ADS), and can sometimes be used as a counter sniper due to its high damage. However, the advantages and drawbacks nearly equal out, bringing up the question is the M1 Garand top tier and worth betting on in the capsule shop?