Alliance of Valiant Arms Wiki
Register
Don't have an account?
Sign In
Advertisement
in: Weapons, Automatic, Primary weapons,
and 2 more 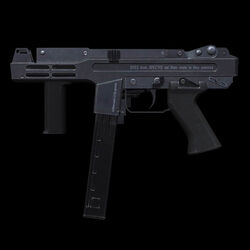 The M4 Spectre is a Sub Machine Gun introduced during the 06-14-10 Content Update and is considered to be among the worst weapons in AVA. Although it possesses decent damage and decent range, its recoil and bloom combination hinder its CQB full auto capabilities and make it less then ideal for most point men.

That being said, once the weapon is mastered and modded it becomes a quite capable weapon with exceptional suppressing fire capabilities for a point man weapon. However, without much experience, it is quite useless and limiting. The overall recoil of the M4 Spectre is quite similar to the rifle man's M16A2.

It is also notable as being the only known point man weapon with a Shock Absorber Stock available to it.

&Although the accuracy stat is absurdly low, just like the M16A2 the weapon can amaze with well articulated headshots especially due to its high Range and decent overall damage.

UMP45  - The M4 Spectre has similar stats and performs comparably, while having 2 times more of the ammunition

Aug A2 Commando - The Aug has superior Recoil Control, ROF and Scope, The M4 Spectre has More ammo and less Bloom

Calico M950 - The guns have many similarities, but the Calico is slightly better at range, while in CQB a well modded M4 Spectre can win due to less bloom.