Alliance of Valiant Arms Wiki
Register
Don't have an account?
Sign In
Advertisement
in: Weapons, Primary weapons, Bolt-action,
and 3 more

The Mosin-Nagant is a bolt-action sniper rifle used by snipers, and is available for permanent purchase in the in-game shop for 200 red tickets by soldiers of any rank. It is an original as opposed to an upgraded model and/or custom variant; having been based on the real-life weapon of the same name.

The Mosin-Nagant boasts a fast scope-in and draw speed, coupled with both high damage and range. This makes for a weapon with extremely competitive overall speed but despite this, where it's a bolt-action sniper rifle, you are still advised to quick-switch when possible in order to minimize the delay between successive shots. Since this weapon is able to rapidly fire, engaging groups of targets is shown to be easier; proving suitability for smaller maps, rushing and flanking.

The Mosin-Nagant does not have a second level of scope magnification available, meaning that it isn't particularly designed for efficiency at longer ranges, but the magnification provided nevertheless makes locating targets comfortable at the majority of distances. The single scope phase and fast scope-out speed also enables heightened mobility – this tactical advantage allows you to push harder than normal when using a sniper rifle, and means that you can recover faster after shooting.

The Mosin-Nagant rarely tags due to its high damage and range, however you may still experience tagging when shots land on a target's limbs; but this will most likely only occur when they are wearing higher-tiered armor at much longer distances. Armor generally does not appear to affect the damage done to the torso – shots to the upper body and neck will still secure the kill, unless the shot has first penetrated another player or surface, in which case a head-shot would be necessary to avoid tagging.

The Mosin-Nagant has quite a high accuracy when hip-firing, similar to other popular sniper rifles such as the DSR-1 and FR-F2. This means that, in close-quarter combat, no-scoping is very viable. Since tagging at point-blank range is hardly observed, when landing a shot this way, you can expect to secure the kill most of the time. Due to this weapon's high overall speed, this method of play is not usually encouraged, as more tactical plays can be made at medium and long distances.

The Mosin-Nagant cannot be modified.

The Mosin-Nagant cannot be modified.

The FR-F2 is a renowned sniper rifle and is very popular due to its consistent damage and massive armor penetration. Despite having lower damage and range than the Mosin-Nagant, the FR-F2 has proven to be more useful against targets with a higher armor rating due to its penetration statistic. It is also on-par with the Mosin-Nagant in terms of its hip-firing capability, but is let down slightly by its speed – having a slower draw and scope-in speed means rushing becomes a less viable option, and leaves you faced with a bigger penalty when missing shots. 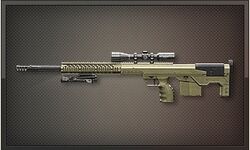 The DTA SRS and the Mosin-Nagant share a similar play-style, owed mainly to their fast draw and scope-in speeds. Due to the successive reload animation of the Mosin-Nagant, the DTA SRS is able to provide a new ammo clip much faster, but has one less capacity, making both weapons perform about the same in terms of engaging multiple targets. Both of these weapons excel in sniper-only modes due their ability to recover at an increased rate. Due to the damage output of the Mosin-Nagant, you can expect to see it tag less often than the DTA SRS.