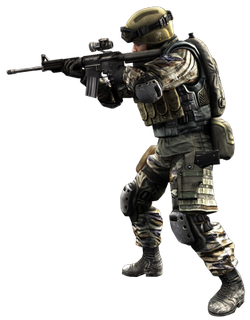 The Rifle Man (often referred to as "Rifleman") is one of three player classes in Alliance of Valiant Arms.

The Rifle Man is outperformed by Pointman in close quarters combat (CQC) and by Sniper in long distance combat assuming player skill levels are equal, but can beat both when outside of each classes respective effective ranges. They are not the best class, but it has the potential to win against all odds as with all the classes.

The Rifle Man has a better defense rating than any other class which keeps his durability high (Depending on you and your enemy's armor load-out). They are the most well-balanced class in the game, and are the most prominent class from casual players to the world championships. They excel in shooting in short bursts, but tend to crumble when firing in full auto (though there are exceptions based upon weapon stats).

The Rifle Man's primary weapon consists of Assault Rifles, which can then be divided into two smaller groups: Standard AR's and Battle Rifles. An example of each would be the M4A1 or AK47. Each have a different play-style, and are equally effective.

Grenades are essential for the Riflemen. The Rifle Man can throw grenades faster and farther than any other class, so don't forget to use grenades.