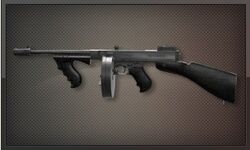 The Thompson is a rather effective weapon for close quarters, and boasts a moderate 35 damage and a high 50 round magazine capacity. Recoil is not a problem when bursted and there is nearly no bloom. The user should take note of the rather slow reloading speed. However, when used properly, the Thompson M1921 dominates close quarter combat and easily goes head to head with the AKS-74U Desmodus.

This gun has no modifications since it is a capsule weapon.

This gun has no modifications since it is a capsule weapon.