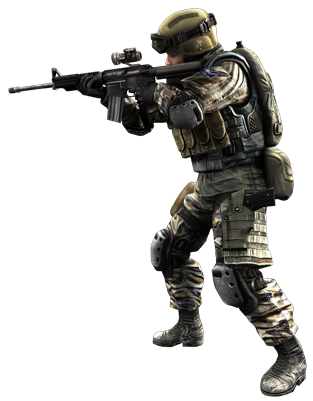 Weapons, or known as guns, are the main point of A.V.A. If you plan to get anywhere you need a gun. For a full list of the weapons currently in A.V.A, see this link.

Guns in A.V.A all have the same rating criteria: Rate of Fire, Damage, Mobility, Range, Accuracy, Stability(recoil), and Ammo(number of bullets per clip). Each class has weapons geared toward the play-type offered by that class (eg. pointman weapons are all smgs and shotguns). All weapons can be customized to some degree, but some weapons (like the M4) have many more add-ons than others (like the AK47 or the M16). More details on Modifications can be found in Adding Modifications.

Pointman (PM) weapons are all chosen for their Close Quarters Combat (CQC) proficiency. Shotguns, Carbines, and SMGs are the PM's weapons of choice. PM weapons are chosen for their high rate of fire and mobility rather than damage and range. One exception to this is the shotguns, which possess high damage, though at the cost of firing rate and range. SMGs are used in close to mid range fighting where high rate of fire is more valuable than accuracy. Examples include the AKS-74U , Benelli M1014 , FN TPS ,  K1A1 Rail , Kriss Super V , MP5SD5, SPAS 15 , SR 2M Veresk and the Training MP5K, the default PM weapon. The most popular weapons are the X95R and the MP7A1

Rifleman (RM) weapons are excellent for mid-range firefights. RM weapons form a very broad category and attempt to mix the accuracy and range of the sniper rifle and the rate of fire and mobility of the submachine gun. Usually, the higher the damage, the less stable the gun becomes (especially in sustained fire) although with most guns, recoil is easy to handle though tapping and bursting. RM have the widest variety of weapons, and are arguably the most popular class in all of AVA. While this is not necessarily the most effective class for all scenarios, its the most widely used. Examples include the well-knownAMD65 , FAMAS MK.3 , M4A1 , OTs-14 Groza , Remington R4 , XM8, SA58 Para and the most popular weapons are the AK-47, Diemaco C7A2, and AK-12 .

Snipers excel in long range to medium range fighting looking down the scope of their rifles, preferably from someplace high and hidden. Close range effectiveness is severely limited by sniper rifles' (often) slow rates of fire, general combat incapacity when not scoped in, low mobility, and limiting tunnelvision while scoped in. In exchange, all of the sniper rifles (SR) have extremely high damage and often high range, and have a variety of scopes which can emphasize mid range combat (quickscope) or long range to better fit the players playstyle to use these traits to their highest capacity. Quality sniper rifles are often hard to judge as factors not listed in the stats come into play, like the time it takes to scope in or the time it takes to pull out (for quickswitches). Snipers are the second most popular class to use in AVA. It is not uncommon to see the majority of the players on one side using the Sniper class. They also have skills that decrease the draw time and reload time of their pistols  and increase their pistol's reserve ammo. This is crucial in quickswitching and in close quarters combat. Examples of Sniper Rifles include the ASW.338 , AWM , Blaser R93 , HK417 Sniper , Knight SR25, TPG1 , VSS  and the default Training R93 . Currently the most used snipers are the M40A5, FR-F2, DSR-1 and the M1903A1

Many of the weapons in the game can be upgraded with new sights, barrels, grips, and trigger caches, some weapons more so than others.